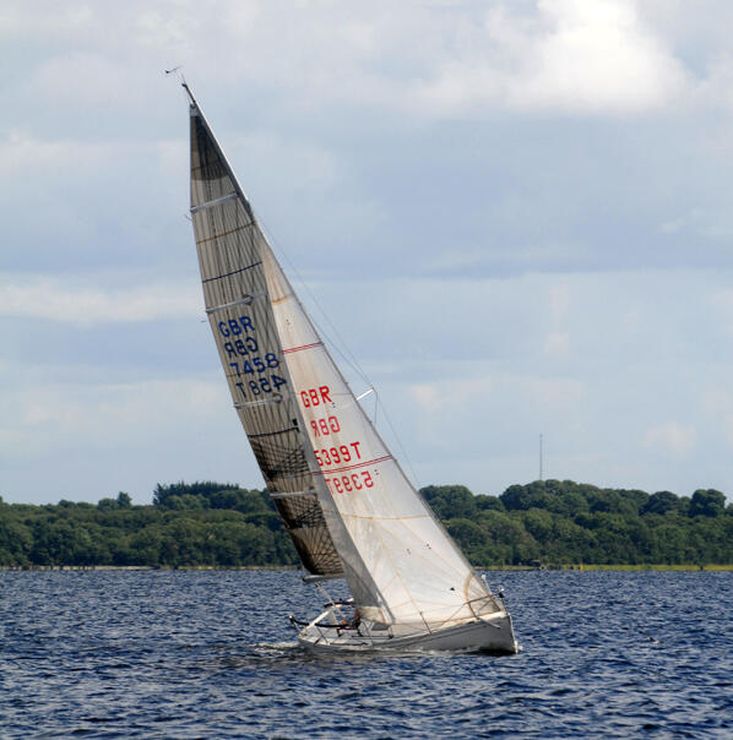 Insure this Boat
Transport this Boat

Lying at Lough Ree Yacht Club Athlone Ireland
Beneteau First Class 8 Sail Number GBR 7458T with 4 wheel braked trailer.
Hull Number 014408512080083
Mainsail, #1, 2x #3, #4, 2x Spinnakers, Spinnaker Pole, Anchor and Line, Compass, Speed and Depth Instruments (need new battery), Manual Bilge Pump, Windex, Mainsail Cover and Fenders. Outboard. Lifting Keel Winding Mechanism replaced 2019.
Excellent club racer ideal for 2–7 crew and family sailing. Main is in very good condition. #1 and #3 bought second hand in 2018. Outboard includes mounting that slides inboard. Down below stripped out for racing but easily fitted out for cruising. Moonshine was bought originally by the RYA for match racing. The mast was shortened by 3ft and the running backstays were removed. This made her easier to tack and you need one less crew in the cockpit. The advantage today is that she can easily be sailed and raced by two crew although she goes fastest with six or seven. John Webb bought her in 2006 and replaced the main, shrouds, spinnaker pole and brought her back to racing condition as described in the attached article. We bought her in 2009 and moved her to Lough Ree Yacht Club where she has been raced for 10 years. We have done regular maintenance over the years. The trailer had its tyres replaced in 2015 and the all rollers were replaced the following year. The stanchion post bases have all been renewed as were the clutches. We still have some spares. The outboard mounting block was new in 2017. Two second hand sails (No1 and No 3) were bought in 2018. Moonshine has a magnetic compass and a mounting for a TackTick T060 Microcompass. The Microcompass has been lost.

She is well known in the yacht club and this is an opportunity to go sailing immediately with no transport or VAT costs.